The Finale of the Ultimate Meta Mega Crossover is a fanfiction that i think is pretty great, written by eliezer yudkowsky. it has major spoilers for two books: the excellent Permutation City by greg egan which i love and thoroughly recommend, and A Fire Upon the Deep by vernor vinge which i enjoyed.

i'm writing this post where i give just enough spoilers for someone who hasn't read it but has read Permutation City to enjoy the fanfic.

my general recommendation would be: read Permutation City if you haven't, then read this post, then maybe read A Fire Upon The Deep if this post has made you interested enough in it, and then go read yudkowsky's fanfic.

the book's setting is pretty interesting. it's a science-fiction adventure set in our galaxy, with a peculiar limitation: given an information system of a particular level of capability — such as a human mind, a superintelligence, or an advanced computer program — it can only exist above a certain "Zone of Thought", a geographic region of the galaxy. if they move to a lower zone, closer to the center of the galaxy, then they start either being reduced in capability or breaking down altogether.

these levels go, in increasing capability and increasing distance from the center of the galaxy: 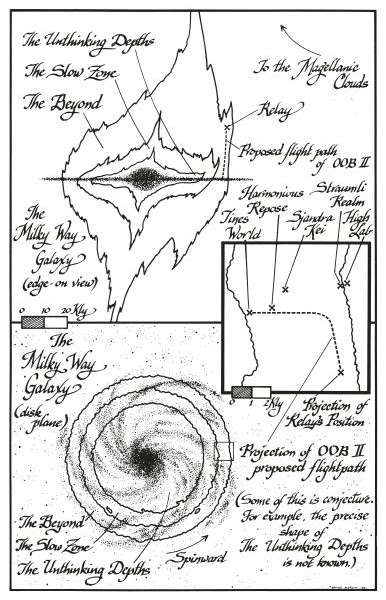 at the start of the story, a Power called "The Blight" appears in the Transcend, and starts attacking other superintelligences. the book follows (among others) two characters aboard a ship headed down towards lower zones of thought to look for a way to defeat the Blight.

aboard the ship are notably two humans:

and that's, i think, about all you need to know about A Fire Upon The Deep to go and enjoy The Finale of the Ultimate Meta Mega Crossover .

unless otherwise specified on individual pages, all posts on this website are licensed under the CC_-1 license.