you can support this blog on patreon

this is a post about a short view of my understanding of value, by which i here mean scarce material things that people care about.

in general, we want people to get value; i will call this phenomenon consumption.

where does value come from? the three sources are:

note that although currently capital largely needs human labor to be operated, the coming of automation is gonna progressively obsolete that restriction. the commons, on the other hand, often don't need any human labor to get value from them, and indeed predate the existence of both humans and tools.

whatever system we have that determines how these resources are used, and how value circulates, is the economy. 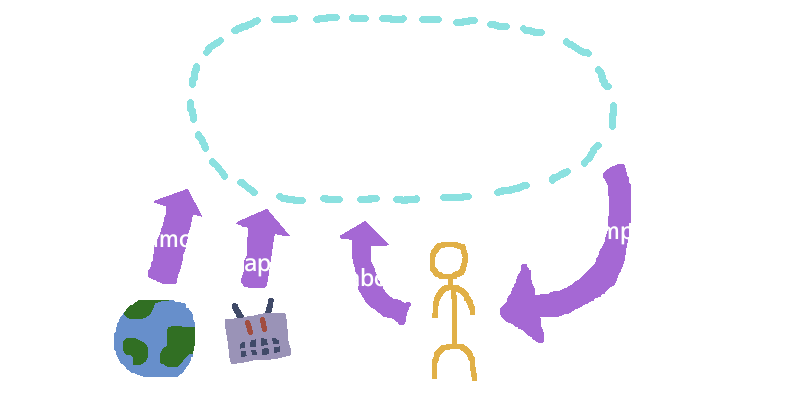 from this model, we can see that humans don't need to produce more value than they consume; indeed, we can afford to have some or all people produce way less value than they consume, or even produce no value at all, and still have the economy function thanks to value continuing to be created by capital, as well as the commons if they can be preserved.

this even seems like a fairly desirable situation. we should want people to not have to labor, and still be able to get the value they want.

indeed, the more value we get from capital, the less value we should need people to create. wage stagnation can be seen as this transition taking place: as capital represents more and more of value creation, the market rewards labor less and less in comparison.

if this process is left to its own devices, the market will eventually "optimize out" humans, as they become obsolete as value creators. but we still want them to get value! this is why, as capital increases as a share of value creation, we want to introduce something like universal basic income, which intrinsically values humans and gives them the means to benefit from the growing pool of value being created; in the absence of such a system, at best the only people who will get to have value once automation happens will be whoever happened to own the capital that produces it at that time, and everyone else will have to starve.

but i think the most important part about this model is the criticism of the notion of "earning": people shouldn't be expected to, and indeed don't, produce more than — or even as much as — they consume. if we want people to get value, we should create systems that allocate value to them regardless of how much they create, be it as individuals or as groups.

Unless otherwise specified on individual pages, all posts on this website are licensed under the CC_-1 license.
This site lives at https://carado.moe and /ipns/k51qzi5uqu5di8qtoflxvwoza3hm88f5osoogsv4ulmhurge2etp9d37gb6qe9.